Fangirls, this book is a perfect reminder of why I love Harley Quinn. I mean, first off, she’s a fucking babe, okay? And second of all, last month she stole a knife from some Joker Fanboy, and this week she use it! She’s fun and cute, but dangerous. And this issue really showcases it.

So in this issue she escapes, again, but lucky for them, it’s just her cell. When the Unknown Soldier is hugging her after killing the Joker Fanboy, she stabs him. She knows he’s Waller’s bitch, so she tells Waller that she’ll do what she wants, stabs him, and hits the bricks.

She takes down a couple guards with her “skeelz,” and continues on. By this point Waller has sent everyone after her, but they’re not fast enough. So James Gordon Jr goes out too. And Harley gets into Waller’s room. She ties her up and takes over. She releases Deadshot and invited him up for a tickle party. He runs down some guards as well, and then the Unknown Soldier (who somehow is still going after that stabbing).

But before Deadshot makes it, JG Jr takes him down, and meets Harley in Waller’s office. There, he accepts her offer, but listens to Harley’s needs for the team. She wants a better deal for them, and they’re going to get it. It ends (and briefly begins) with the Squad in Las Vegas, fighting a massive beast. Instead of the years Waller usually threatens, the Unknown Soldier says they’ll be out in 11 months.

I love the showcase of Harley in this. You see her acrobatic ability (which hasn’t shown up too much in Suicide Squad), her danger, and her reasoning and wheedling abilities. I like when she’s fully rounded as a character, an it’s seeming like Ales Kot is going to keep giving me that.

It Vegas! And there’s something out there that is controlling the minds of everyone. So they send in the Suicide Squad to see what’s up, and fix it. When they get there, the Unknown Soldier finds out pretty quickly that there are billboards everywhere that bring out people base instincts. 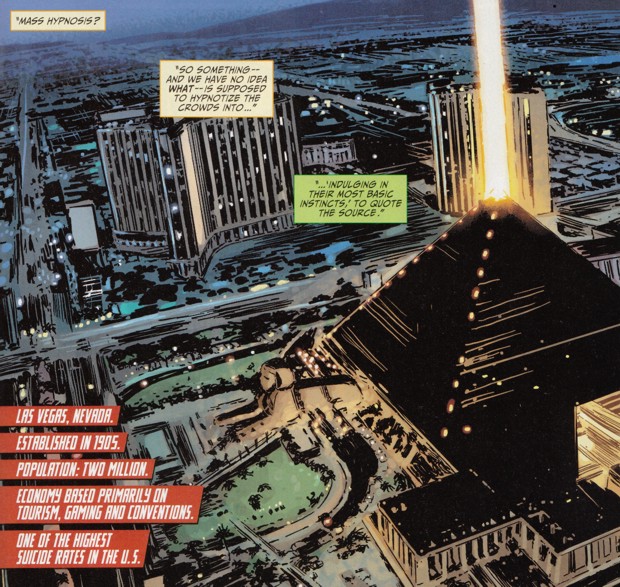 It takes Deadshot and Harley a little longer to figure out, because Deadshot gets a dose of hypnosis, and beats the tar out of a gent, trying to extract the information. Using a tracker that Unknown Soldier put on a couple member of the mysterious organization, Cheetah and King Shark find the base, and King Shark drops in on the “Mother,” who is asking what their spirit animal suggests they do.

And then the “Mother” brings to life a massive creature (several stories high). He’s made of the dead bodies of people who commit suicide in Las Vegas, and that’s a lot of people. This gigantor throws King Shark at Cheetah’s helicopter, and the rest of the Squad fall in to help. King Shark goes after the monster’s foot, and everyone is shooting all over the place until Unknown soldier takes command.

He tells everyone to shoot at the chest of the monster and they stop him, just in time. James Gordon Jr tells Waller that he thinks the monster was headed to a pyramid because it is shooting a beam at the moon (and Inuits believed that the moon is the afterlife). When she shoots down that idea, he suggests that it’s also a huge symbol of capitalism. They’re interrupted by a knock. It’s a couple of scientists from the lab, here to tell Waller that the Samsara Serum that ha been reviving members, will eventually kill them. And that means Waller’s in trouble, because she used it.

What a doozy! It’s really upsetting to read that the Squad may die, especially since it’s been doing so well. Significantly less mess ups since the trades. But we’ll see. I’m excited to see more of Cheetah; lady’s a beast (literally). She has a cover spot in a couple issues, so that’s promising. But until then, keep making trouble and keep reading, Fangirls!