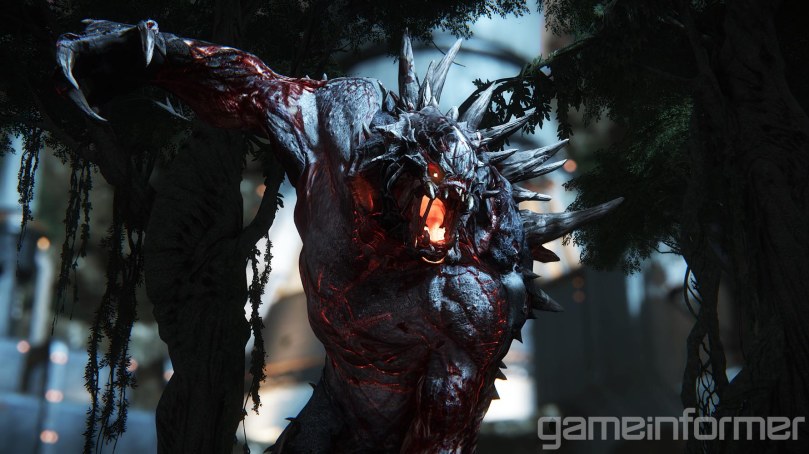 So Fangirls, Evolve is a game I was previously very excited about simply based off of concept and as more information and content arises, I’m basically drooling while I wait for this game to come out.

I am not usually huge on shooters at all, but the concept of this game is what catches my interest. Evolve is a 4 v. 1 multiplayer game that plays exclusively online. Different types of hunters take part in the game such as a trapper, a support, a medic, and an assault class hunters, all with different unique abilities that are integral to their goal; find and kill the monster. The monster also has its own unique skills, and it’s goal is a little more split. The monster must stay away from the hunters for as long as it can, feeding on the wildlife inside the enclosed jungle environment and giving itself more power. After a while, the creature progresses and evolves into it’s stronger forms, making it harder for the hunters to take it down. If the creature encounters the hunters too early, it can either stand and fight or run to get away. 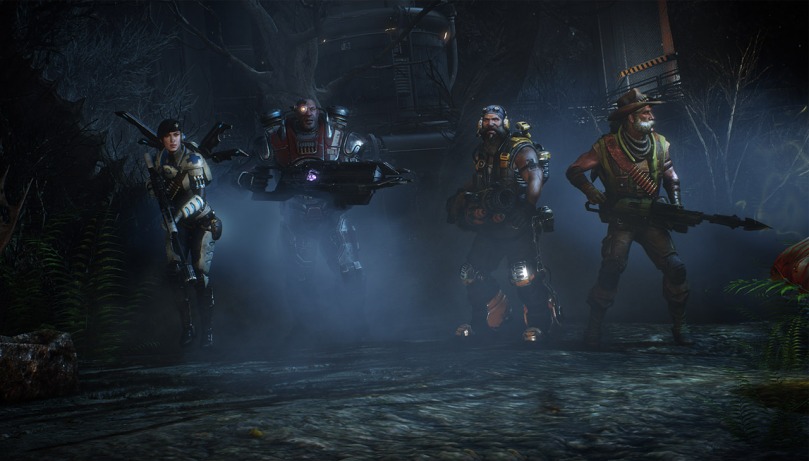 Eventually though, the two opposing forces must come together in a fight to the death. Although, I did read that the monster will also be able to win through a secondary goal of destroying a human base located in the playfield. Only one type of monster has been revealed, “The Goliath” but there will be many monsters the player can choose from, all with different strengths. The game also features many different maps, but so far only the Jungle has been shown.

What I find so interesting is the progression that the creature gets, and the way that losing 1 hunter(though they do respawn after a few minutes, but only once from what I can tell) is a huge loss, and the group becomes weaker to the point where a strategy change is needed. The environment also plays a huge role as almost a 6th player. If you aren’t paying attention, it will be very easy to die without ever making contact with the monster.

The game does not have an official release date yet other than Fall 2014, but that is enough for me for now to know that within a year I will be hunting either as a monster or as a hunter. It will be coming out only for PS4, Xbox One, and PC, so you know that it’s a game that was simply too awesome for the older systems to handle. I feel as though I can’t accurately describe the excitement here, but trust me, do as much fanatical research as I have and you will be right along with me with a puddle of drool at your feet!

All characters, images, and videos are copyright of their original owners.