So, I understand that this game came out a month or two ago now, but I really enjoyed it. It’s something even a newbie to the series can enjoy, and I think that was their intent here. There are some latent references to the specifics of the previos two games but nothing that will hinder the understanding of the story. 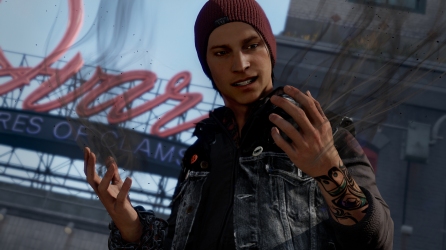 The games takes place 7 years after the events of the last game, and conduits(those with powers) are being locked up and contained by the D.U.P. It follows a character named Deslin who is part of a Native American reservation called the Akomish. Everything is pretty normal until a van full of prisoners crashes and 3 conduits escape. Deslin’s brother Reggie is a cop, and Deslin is just sort of a hero at heart, so they both spring in to help. Deslin eventually catches up with a conduit named Hank who has smoke powers. After making contact with Hank, Deslin gains the smoke powers and officially becomes a conduit. The leader of the D.U.P. (a woman who goes by the name of Augestine) eventually catches up with Deslin after he has fought with Hank and used her concrete powers to put painful concrete into the people of his tribes’ bones.

So, there is the general plot. Deslin wants to get to the city, take down Augestine, and absorb her concrete powers in order to help his tribe. Along the way he meet other conduits and gains their powers as well, which are very cool. I won’t spoil what they are in case you want to preserve the surprise.

Generally the game is a nice length and extremely engaging. Back when I played it, I shurked important school work at times to play(I don’t suggest doing that, Kids). The world is completely free roam and takes place in Seattle. There are many small side missions that can be encountered, and many things to collect/destroy for 100% completion.

Let’s not forget about karma! Just as in the previous games(as I understand it) you can choose to do good and bad actions to influence your morality. In this game, the more nad or good karma you gain, the more abilities you unlock on that side of the spectrum. Bad karma gets you powerful moves suitable for killing your enemies, and good karma gets you moves that could potentially help you subdue them or otherwise defeat them without getting blood on your hands.

Karma can be achieved in a number of ways, one of my favorites was the spray painting. Especially with the PS4 controller being used as your spray can. You had to turn it sideways, shake it, and then spray in order for it to work. They come out in a very Banksy-like style. The symbol on your coat also changes as you move in one moral direction or the other. I have only played as a good character, because playing it bad actually feels wrong, but the symbol for being good was very cool! The light on your PS4 controller also changes. It starts out as white, and as you progress, it either turns blue or red.

All-in-all, I would say this game has replayable value, and I could definitely see myself playing it at least one more time in order to force myself into being bad. I highly suggest it if you have the money and the PS4 to play it!