Hello, faithful Fangirls! The other day I read a book called Dorothy Must Die, and had some mixed feelings about it. For the most part, it’s well written, but the end bothered me a bit. A warning to those who click read more; there will be spoilers.SPOILERS AHEAD. 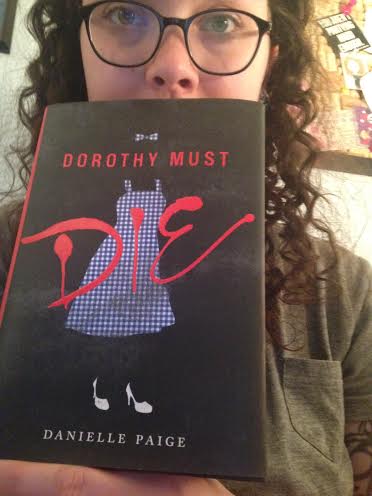 So, for the most part I liked it. The idea is that another girl from Kansas goes to Oz quite a while after Dorothy has left, only to find that Dorothy is evil and is destroying Oz. She gets picked up by the Order of the Wicked with one mission: kill Dorothy. I’ve noticed that I really like stuff that has to do with alternate Ozs (Tinman and Wicked specifically), so I assumed I would enjoy this book.And for the most part, I did. Readers follow Amy Gumm’s transformation from social outcast in Kansas to powerful rebel in Oz, and see her move closer and closer to Dorothy, gaining her trust and learning more about her to destroy her. When the time comes for it to happen, though, it doesn’t.You see, I was really hopeful. I came to see how much of a giant bitch Dorothy is (Wicked had already instilled that in me), and how dangerous her cohorts were. The Lion sucks fear and life out of his victims, the Tinman leads a gang of half metal half human mercenaries to do Dorothy’s bidding, and the Scarecrow experiments on all creatures (plus he takes their brain power and injects it into himself).MAJOR SPOILERS HERE.But when it was time for Amy to kill Dorothy, there weren’t enough pages left in the book. Reading on, Dorothy narrowly escapes Amy. Amy is brought to the Wizard, who tells her that before she can kill Dorothy, she must take his gifts away from her cohorts. So when the Tinman shows up, she takes his heart while the Wizard battles Glinda the not so good witch. Amy leaves with Ozma (the true, but often absent ruler of Oz), and the book ends.Now, I love sequels. I’m always up for a good series. But the end of this book held no mention of a sequel, only an e-book prequel that was available. The idea of learning about Dorothy’s ascent to evil is intriguing, but not what I want. After spending a couple hours reading emotionally charged pages, I’m disappointed that there isn’t even an allusion to a sequel.The book was good. You feel frustration right along with Amy as she tries to understand the magic of Oz. How she’s mad at the way her mum treated her. The author, Danielle Paige, uses cursing the same way I do, as an extension of the vocabulary in her text, not to be outrageous. It was a pleasant change.This book is intended for hound adult readers. The cover is nice, but I didn’t like the italicized version of the font was irritating. And I was damn disappointed in not the ending, but the lack of sequel. Check it out, Fangirls. If you hear any news of there being a sequel, let me know, and we can read it together. Until next time, keep reading!All images and characters depicted are copyright of their respective owners.