Fangirls, DC does some kitschy stuff. These issues are part of two of the kitschy things they did, awhile ago, and I’m not really impressed at all.  Heck, Future’s End is a HUGE monetary  gain that they’re making (Batgirl’s issue came out about three weeks ago, on the 10th) and I’ve bought into it.  I’ve got the lenticular Villain’s month covers from last year and all that dumb stuff, but I liked those.  These I did not.  The final three I did enjoy, and I feel like they finished out Gail Simone’s run rather well. 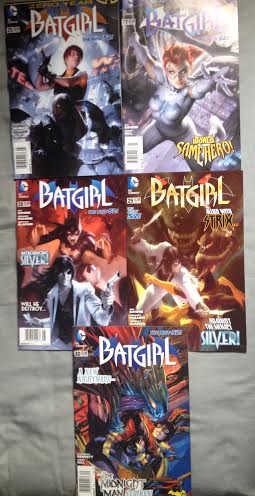 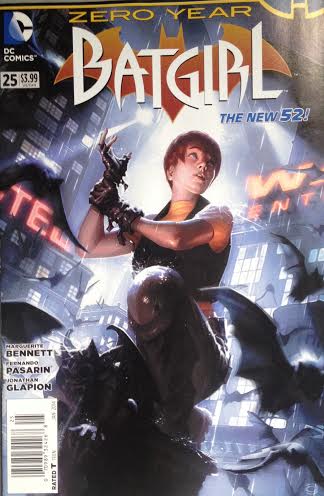 I guess we’ll start with Zero Year, because that comes first chronologically. For DC, a lot of issue 25s were called Zero Year.  They are issues that do not contribute to the current storyline at all, and are, quite frankly, an interruption.  The idea behind it, was for DC to show us a glimpse into these characters’ lives from before they really knew anything about what they were doing in the hero world; be it in Gotham, Central City, or wherever.  It’s also supposed to show something that happened to that character, that really made them go into their current night-time venturing; be they heroes, or otherwise.

I don’t know about you, Fangirls, but when I think of Batgirl’s past, I think about the Killing Joke, and that’s what I was expecting with this.  Maybe the issue would happen after the shooting, and we would see how Commissioner Gordon reacted to her being in the hospital, not able to walk.  It’s not.  It’s about a big flood and the first time Barbara Gordon jumped from one rooftop to the next.  Congratulations.  I understand the importance; She deals with someone who appears to be nice, then turns on everyone, trying to steal their only belongings.  That’s sad.  And it pushes her to heroism, which was the goal of these issues.  But I just didn’t like it.  It was written by Maguerite Bennett, and interesting, but not for me. 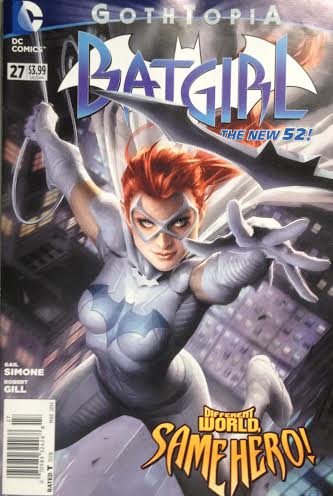 Another kitschy series-thing DC did, was Gothtopia.  It happens in the titles that have Gotham local characters, and is based in a world where everything is very different from the current universe we’ve been reading.  I think the biggest change, to me, was the idea that Gotham is a safe and happy place.  Hence the “-topia.”  That’s super weird to me, and I didn’t like it.  Batgirl works with Knightfall to take down a woman who is trying to disrupt the happiness of this weird Gotham because she sees what it’s really like.  All of the Gothtopia issues got resolved in Batman 27. 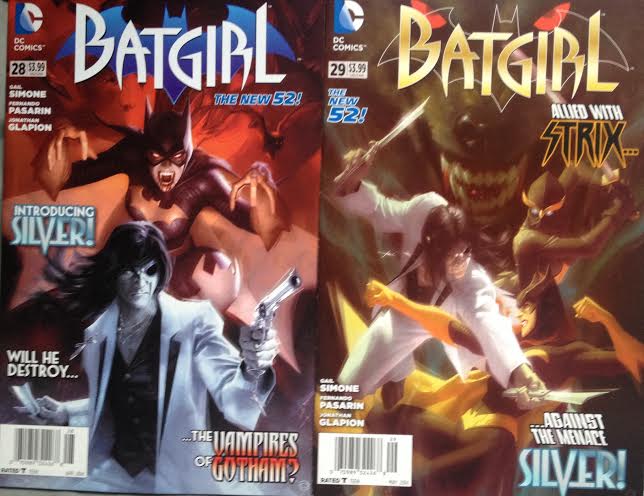 Issues 28 and 29 deal with vampires.  And I kind of wish I could leave it at that.  But there is a man, who goes by Silver, who thinks that the caped crusaders in Gotham adopt the Bat-helm because they are actual vampires.  He kidnaps a little girl, so Batgirl and Strix go after him.  When they find him & he realizes that they aren’t vampires, it seems like all is resolved, but of course it isn’t.  Batgirl brings down the kidnapped little girl, and it turns out that she really is a vampire, and the vampire king comes to take her away, and the issue ends.  I didn’t like how out of the blue this was.  Simone, for the most part, has done a pretty great job of weaving the characters’ stories in and out of this run.  Knightfall gathered together Batgirl’s villains to talk about the Avengers Initiative, oops, I meant killing Batgirl.  Bad guys from the past keep showing up, and every now and then, we see Batgirl getting a bit darker.  No, she’s no Batman, but it’s helping me see when she started becoming Bête Noire. 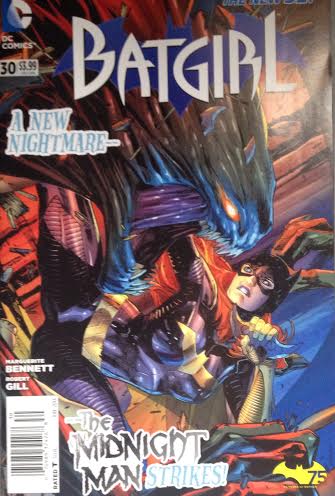 Issue 30 is another weirdly alone story, also by Maguerite Bennett, where Batgirl fights one of Gotham’s fabled monsters, the Midnight Man.  The Midnight Man is something like Bloody Mary; it’s something you do to goof around and freak yourself out.  Usually nothing happens, but this time something did, and the Midnight Man strikes.  It irritated me.  I don’t like how many times the story has been deviated from; it’s frustrating.  I think I was spoiled by Brian Azzarello’s Wonder Woman; all 33 issues are part of one cohesive storyline. 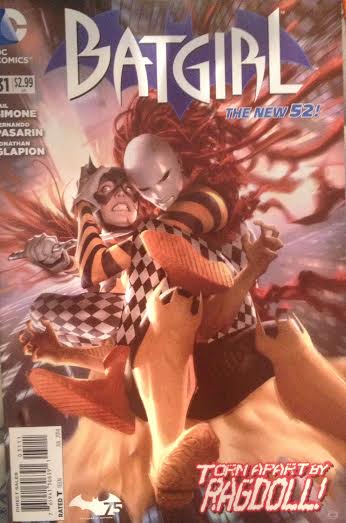 Honestly, 31 is weird too.  Batgirl fights the Ragdoll (a weirdly flexible dude who shows his “love” by hurting people).  He was hired to go after her roommate and her vigilante / eco terrorist pals, but Batgirl steps in and takes care of him.  It doesn’t really contribute to the main story at all, so I found it irritating. 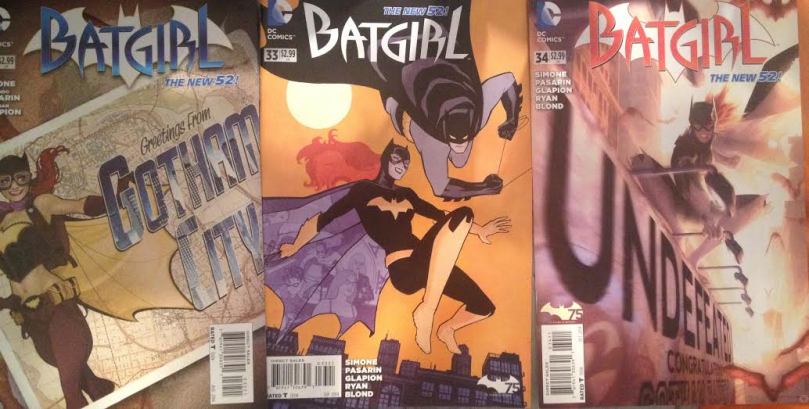 Issues 32 through 34, though, are well done.  Batgirl has to call together all of her contacts (and some new ones) to stop a war that Charise Carnes aka Knightfall has waged on the crime of Gotham.  That being said, Batgirl isn’t defending criminals, she’s stopping Carnes’ forces from burning Gotham to the ground.  In these final issues, Batgirl works with Huntress and Black Canary to bring down Knightfall and it’s really well done.  I enjoyed reading these, and I’m glad that they were the end of this run.  It also ends neatly with Barbara asking Alysia if she wants to move somewhere new with her.

I’m glad Simone’s run is over, and I think she finished it in a very strong way.  I’m in love with Babs Tarr’s new costume for Batgirl, and I can’t wait to see her new story.  How did you Fangirls feel about Simone not writing Batgirl anymore?  What about that Future’s End issue?