Wow, it’s hard to believe that Harley Quinn has been coming out for a year already!  And since it’s been such a great year, HQ Annual #1 is a “rub n smell” spectacular!  Apparently the title “scratch n sniff” is licensed, so this scenticular issue had to have a different way to say the same thing.

The comic itself is about Harley rescuing Ivy from Arkham.  In the process, they accidentally trip and have crazy hallucinations (all drawn by different artists).  Eventually she does help her get out, and ends up with a new tenant.  The issue had several different scents, with a little Harley next to them to remind you to give ’em a good rub.  I enjoyed the issue, but wish I had bought two copies; one to leave in it’s baggy, and one to read.  I bought the issue with weed stank as one of the scents, because it isn’t available in Canada (unless you know a guy), and I should have left it in it’s bag.  I don’t think it’ll make my other comics stinks, since all of the scents are on the inside, but it’s still getting double bagged.  My favorite scent was leather, but all of them are pretty realistic.  If your local comic shop still has some, go pick one up, it’s a goofy issue, but has lots of nice art styles in it. 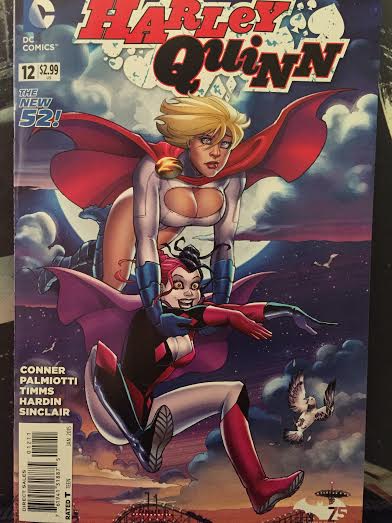 Issue 12 is also super goofy.  I am loving Harley and Power Girl as a team.  In this issue, they get sent into a different universe, and have to find their way back.  They anger a queen by killing her lover, but her husband eats her anyway, and then tells them the best way to get home is to go see Manos, the world destroyer with infinity rings.  It’s a very subtle reference, right?  So the ladies head over and destroy Manos, freeing his children who hate him, and come back to our world.  But the fools who sent them to the first alternate universe send them to another, and they come back, ready to put the hurt on.

Fangirls, Harley Quinn is hilarious.  Her’s is one of the comics I’m most excited to pick up every month, and I’m quite glad she’s getting a Holiday special (that comes out this Wednesday!).  If you haven’t been picking up Harley Quinn, you should get on it.  Sure, it isn’t the Harley you’ve known, but its a good type of different.  Go read it.