It’s been some time since we’ve checked in with the Bunker folks in crisis. This has been a fantastic and intense series and I was happy to jump back into it. I almost forgot how nerve wracking it is, all the questions that it pops into your head, and how worried you get about everything. These two issues sure brought that all rushing back.

We last left off visiting with Heidi, and shit was getting pretty real. And confusing. I was hoping the next few issues would clear some stuff up for me, but it only digs things deeper. Things are getting a little more confusing as time shifts back and forth between the present and the future. Present people have contact, or information, about their future selves. It’s hard to keep track of where we’re at, what events have happened yet, and whether they’re trying to stop them or let it happen. For what it’s worth, I think the characters are confused about that too. 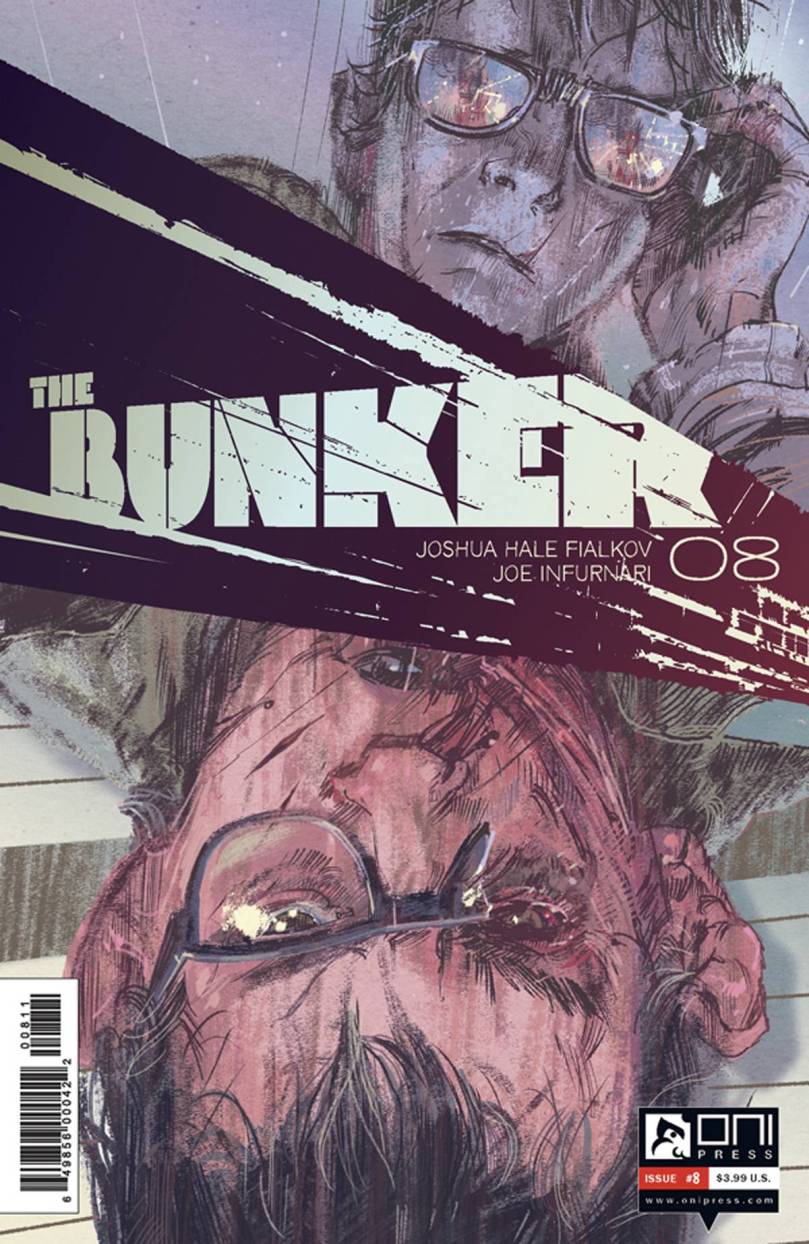 Issue 8 focuses more on Billy. He was the only one without a letter, and why that is hasn’t really been explained yet. He figures out how to work the computers that were in the bunker, and he starts searching for himself. We don’t know exactly what he finds, but he’s pretty damn worked up about it. He goes to some random bar and beats the living hell out of a random guy. Grady gets him out of jail, and they talk a bit about everything .We found out that he tries to kill Grady, but we now learn that Grady tries to kill Billy in return. That issue gets over shadowed when they get a hint from the future that their will be a massive terrorist attack in a few days. Billy is determined to stop it, Grady is hesitant, but agrees. They do some research, and find the bomb where it all goes down. Before going in to disable it, Grady gets a call from his future self, telling him that they’ll get caught. He’ll go to prison or become president. The choice is his. When the bomb gets disabled and the cops come, it’s clear what he chooses as he runs away as Billy gets confronted by police.

Simultaneously, future Billy & Grady have some beef to sort through. Something has happened with them, exactly what is not clear. Grady was planning to send Billy to jail, and execute him, and Billy is of course pissed. But Natasha confronts him, requesting that he meet with Grady. Grady proposes some type of plan to stop all of this from happening. All of this being the world ended and all the chaos of the United States. Billy thinks it’s crazy, Natasha is trying to understand and trust him. Billy never really lands at a clear answer.

Of course, their are other characters in this series other than Billy & Grady. Natasha goes to Daniel with a plan to help what Daniel’s future self created. After doing some research, she found that goose eggs contain antibodies that can help fight the mess that Daniel makes. They’ll still have to create the food that destroys an entire race, but they’ll also be creating what will stop it. It’s a stretch, but they get to work.

Meanwhile, there’s not much about Heidi in this issues. Though, something is certainly going on. Last time we saw her, it was six years AME, so we’re not quite to where we were yet. All we have are a few panels in these issues though. She hears a beeping, then realized that she has an ear piece in. She hears or sees something, it’s unclear, and then collapses to the ground. She looks pretty dead to me, but I know that she’s alive in the future. In the future that we see in these issues, Grady & Natasha seem to be keeping tabs on Heidi. They see her collapse, but it seems to be going along with some sort of plan. They then say that it is time to bring her to her uncle. It’s unclear what the hell they’re doing, but I’m thinking they might be trying to stop her from killing him in the future.

Only time will tell about all of this, Fangirls. I was hoping that these issues would make some things more clear, but for the most part, things are just getting more sticky and intense. This group has got themselves in deep, Fangirls, and they’re still not sure what the fuck they’re going to do about it. Either way, this is a brilliant and beautiful comic that I’m still very much enjoying nearly 10 issues in. I can’t even imagine how much more intense this shit is going to get.