Welcome back, friends! Can you feel it? Can you feel the neon blood pumping through your veins? Is that just me? Hm. Well, either way, we’re back for another recap of my favorite comic based on a cartoon of all time- Jem and the Holograms!

Issue six kicks off with both the Holograms and Misfits in front of the committee in charge of the battle of the bands. The Holograms receive the unfortunate rules that food fights are STRICTLY PROHIBITED and they’re being ejected from the competition. Frankly, I found this very hard to believe. I mean, with The Misfits as the headliners and the band to beat in this whole competition, you’d think food fights would not only be allowed, but they’d be mandatory. Everyone knows Misfits love food fights!

The Holograms are, naturally, super upset about this, but so is Pizzazz! She wants to slaughter them in public, so she wants the Holograms to be allowed to stay in the competition- and also, screw the rules. Misfits don’t do rules, people!

Kimber accuses the Misfits of trying to kill them in the little incident that landed Aja in the hospital. Pizzazz adamantly denies it, and a new hatred ignites between them. The committee says too bad, rules are rules and that’s it. Shana says what we’re all thinking: 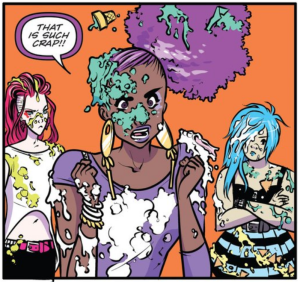 Later, Stormer frantically tries to reach Kimber to explain how she had nothing to do with Aja getting hurt, but Kimber won’t pick up the phone and it’s SAD.

The other Holograms finally realize that the girl Kimber has been seeing in secret is Stormer, and want to know why she was hiding it from them. Kimber explains it was to keep Stormer from getting kicked out of the Misfits and that just feels so authentic. Like, Stormer and love life secrets feels absolutely spot on for how I’ve always imagined that character, so I really loved this panel. (I’ve been a fan for a long, LONG time, I’ve had time to think about these kinds of things.) But mostly it’s just sad that Kimber doesn’t want to talk to her and let her explain her side of the story.

Jerrica comes up with a plan to beat the Misfits at their own game (by which, I’m pretty sure she means the committee who kicked them out, since Pizzazz WANTED the Holograms to remain in the competition, right?) (Oh wait, so I guess it’s revenge for the murder attempt that… right, that wasn’t the Misfits either… Well, never mind!).

The Holograms are busy plotting while the competition finally starts. Can I just say how much I LOVED seeing the Limp Lizards get a cameo?! They show up in the much-loved cartoon episode “The Bands Break Up” (the one where Kimber and Stormer run off together, fall madly in love, and record their own record full of songs about life with pushy big sisters, mean girls, and mascara addiction. Oh, and probably love) and they sing the craziest song which is quoted here in the comic. Awesome!

The Misfits finally take the stage and in another big nod to the cartoon they burst onto the stage in motorcycles shaped like guitars! SO FUNNY! (They had these in the cartoon, too, and of all the things to bring back, this cracked me up the most so far!)

Pizzazz has never looked more terrifying than she does in this performance. The buzz saw earrings and the shaved head are just intimidating as hell, which I’m sure is the point! Clash and Blaze show up to watch from back stage, and it’s totally adorable. I don’t know if they’re just friends or something more, but it’s still cute that they’re holding hands. 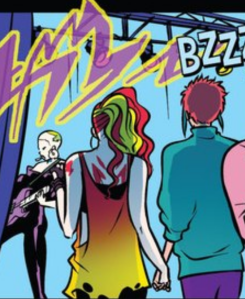 As The Misfits are killing it on stage, The Holograms put their plan into effect. Swirly pink music begins to seep into frame, and the crowd’s attention is all pulled outside. Confused, the Misfits follow only to find that Jem and the Holograms have done the unthinkable and upstaged them with giant glowy dinosaurs and, you know, songs about happy things that aren’t scary OR mean!

I loved this. The giant hologram T-Rex is SOOOO something they would have pulled in the cartoon. Utterly nonsensical, something they could NEVER explain, totally over the top, absolutely, perfectly Jem. Love it! It also makes it clear to The Misfits that they have no idea who they’re messing with.

The Misfits hate this new development, but it’s clear the audience that came to see the battle of the bands LOVES IT. You’ve won this time, Jem and the Holograms, but just you wait! The Misfits are gonna getcha!

Issue 7 starts off a new story arc entitled ‘Viral, part 1’—I think they have a cream for that in aisle five, but I digress. The art in this issue was done by the very talented Emma Vieceli  who’s worked on My Little Pony and Vampire Academy.

In the aftermath of the Misfits Vs. contest, the Holograms are feeling the crunch of their new found fame. Jerrica is overwhelmed, but Shana volunteers herself and Aja to help. Aja says she can’t cuz she’s got a motorcycle to rebuild. She’s just a bad ass like that, or as she describes herself, ‘unavailable and mysterious’. Jerrica  wants to know if they’re going to quit being cute and hilarious and actually help her or not.

Jerrica’s freaking out about the 600 emails and the fact that they need to make a new video, build a website, and do like eight thousand other equally important things. There isn’t enough caffeine in the world, people! Before Jerrica can totally lose it, Aja gets Synergy on the job of creating their new website, cuz she’s a super computer AI thing and of course she can do magic things like that in two seconds flat.

Didn’t they ever hear of the rise of the machines? This is how it all starts, this right here. However, it does solve a HUGE problem for the Holograms, and they’re all grateful for the help so maybe the robots will spare them in the impending uprising.

After Synergy saves the band, she has lots of free time on her holographic hands. Synergy, as it turns out, is also totally awesome at the comforting you during a breakup routine, and she’s the only one to go check on the mourning Kimber as she mopes around her bedroom like a sad little puppy. Synergy urges her to talk to her sisters, but Kimber is worried they’re mad at her and they all hate Stormer. (How that’s possible is beyond me!) Kimber also mentions that Synergy looks a lot like a sci-fi version of her mom, which she likes. In the cartoon, the hologram persona Emmet Benton (Jerrica and Kimber’s father) built was modeled after their mother, Jacqui Benton, who also happened to be a renowned singer before her death, so this makes perfect sense.

Meanwhile, The Misfits are getting told off about their totally unprofessional behavior at the battle of the bands. Feels like whoever planned this event shoulda seen THAT coming, right? They’re informed that they’re being assigned a manager to keep them in line, (like THAT’S ever gonna happen!) and it’s none other than everyone’s favorite sleaze ball, Eric Raymond! It’s not love at first sight, until he reveals:

Yep, Pizzazz is sold on the idea of having a manager.

Can I just say that I sincerely LOVE the way Roxy is drawn in this issue? No offense to Sophie Campbell, who’s art I truly adore (and may have plastered all over my walls. I was a big fan of Wet Moon, what can I say?) but I love the way that Emma Vieceli has drawn my all-time favorite Misfit here.

Elsewhere, Jerrica, Shana and Aja finally see Rio’s article about the Misfits, and are surprised/ticked off that he’d write them a glowing review. I mean, wasn’t he supposed to be all on their side and stuff? Oh, right, but he also happened to have been hired to write about the Misfits and Rio, being all forthright and stuff, actually did his job objectively. At that very moment, Rio happens to show up. In a lovely show of being utterly oblivious, he asks Jerrica if she liked his article.

In the cartoon, it’s clear that Shana loves fashion design. I always got the impression that was her true passion, and music was just something she did in between designing costumes for the next Hologram tour. Her pursuit of a career in fashion is also what lead to the Holograms search for a new drummer, so it’ll be fun to see if the comic parallels the cartoon in that way also!

Across town somewhere, Aja is out riding motorcycles like the bad ass we all know she is. But it gets even better, because it turns out this is a date with none other than Craig Phillips- a man daring enough to be seen in a head to toe pink jump suit. Awww yeah, I like this guy so much better than the cartoon version of Craig already! More importantly, Aja adores the new guy in her life, and it’s clear the feeling is mutual. These two are totally meant to be together, I mean look at this evidence! 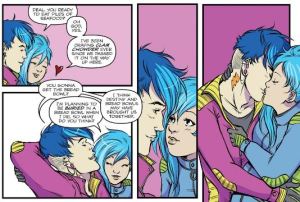 Meanwhile, in a cafe somewhere, Stormer sits alone scribbling lyrics, scratching out and rewriting lyrics, and basically feeling miserable because Kimber has stood her up. She leave a hasty voice message for someone that she’s mad that Kimber didn’t even text her back. Poor Stormer! She’s right, if Kimber really knew her, she’d never think she could have been responsible for dropping scaffolding on them!

This gripping issue wraps up with Eric scheming and plotting. He hires a tall lanky fellow to hack Jem and the Holograms and find out all there is to know about them. Anyone familiar with the cartoon will automatically recognize this new character as Tech Rat- the reclusive genius Eric occasionally hired to invent weird gadgets to sabotage the Holograms. I was super excited to see Tech Rat show up in the comic! He’s a really interesting character who never got much of a back story in the cartoon, and pretty much everyone but Minx (of the Stingers) thought he was a giant weirdo. I always thought there was a ton of potential for this character, so I can’t wait to see what they do with him!

That’s all for now, friends! Next up– the first ever Jem Annual!