Alright Fangirls. We’re back on the horse with Harley, and she’s on the mayor’s Back. This issue starts strong with HQ demanding to talk to the mayor. She thinks that he ordered the hit on Mason while he was in prison. After trying to save him, if you remember, she decided it would be best if he went to Arkham instead. But maybe that’s not the best idea.

After Harley has her talk with the mayor, he has a talk with Cecil, who isn’t the best guy. He says that Harley is causing too many problems, and Cecil promises to take care of it. Soon after, at Harley’s place, they see a highly weaponized group coming out of a van and into the house. Part of the gang takes the fast route to the basement for weapons, while the other stays to guard the room.

After passing out weapons, Harley, Harvey, Tony, Madame Macabre, and Zena split up. The goal is to kill as many of these baddies as possible, but to keep some alive for questioning. They get through a ton of them, and the fighting is damn impressive. I will always love the intensity of Harley’s fights; there’s always blood and guts everywhere.

Once the bad dudes have been intercepted (dead and alive), they get to be flung. Harley offers the living ones life for information, and while most of them give up who hired them, one gent refuses. Harley decides that he gets to help her fling the rest of them all over the place, including directly through the mayor’s office window. The final hitman promises to leave Harley alone, so she promises to not kill him, and he gets to walk away.

One of the men flung through the mayor’s window had a note stapled to his head, claiming “This means war,” and signed by Harley. After another hitman sailed through the window and killed Cecil, the mayor agreed.

Harley’s next mission is to break into Arkham to get Mason out. He’s there, talking with someone through the wall, and of course, guess who it is? The Joker! I’m hopeful that Harley will kick his ass, but also worried that she’ll run back to him, hurting Mason. 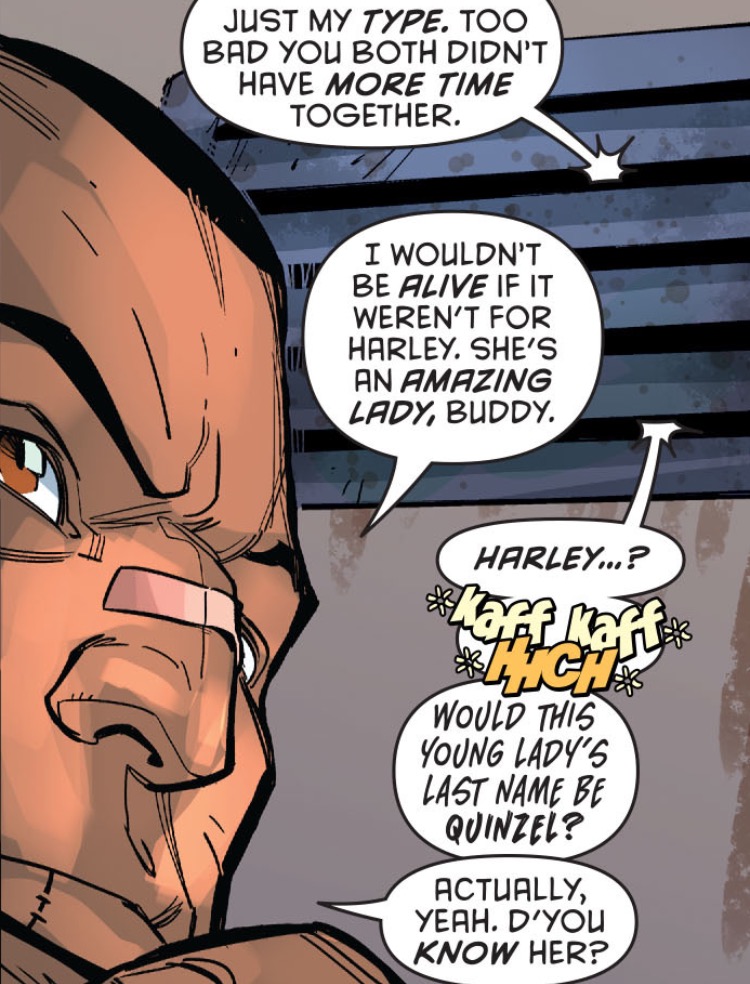 I love this series so darn much. Harley’s intense love of killing is only outweighed by how adorable she is. But I had a big issue with the art in this one. Her outfits are becoming more and more revealing again, which (sadly) is kind of to be expected. But the panel below shows just how off it gets sometimes. Her upper body is appropriately sized, but her lower body looks like it belongs to Tony; too small for her body. It bums me out that the focus is so strong on her looking desirable that they didn’t realize how wrong she looked. 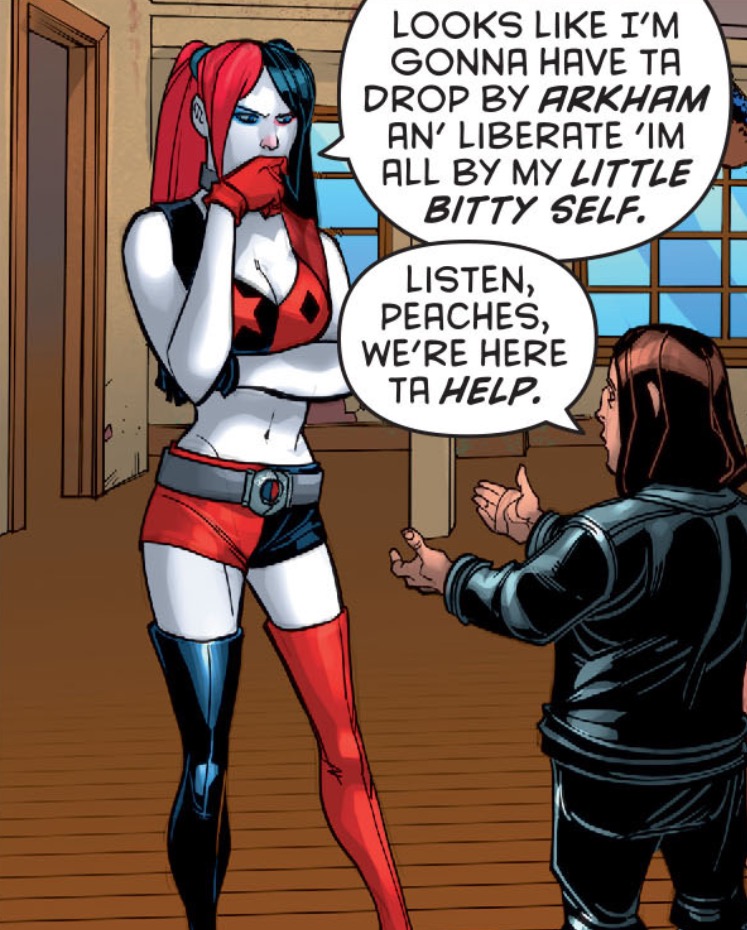 Other than that, I still love this series. I’m definitely worried about what the next issue will bring, but we’ll see when we get there!