Fangirls, I bought this soap from a farmer’s market in Vermont over a year ago, and I did”t get a chance to use it until recently. I have too much soap. But I’m glad I finally got to this beauty because it smells amazing, is lasting quite some time, and lathers fabulously. I can’t get enough of it. 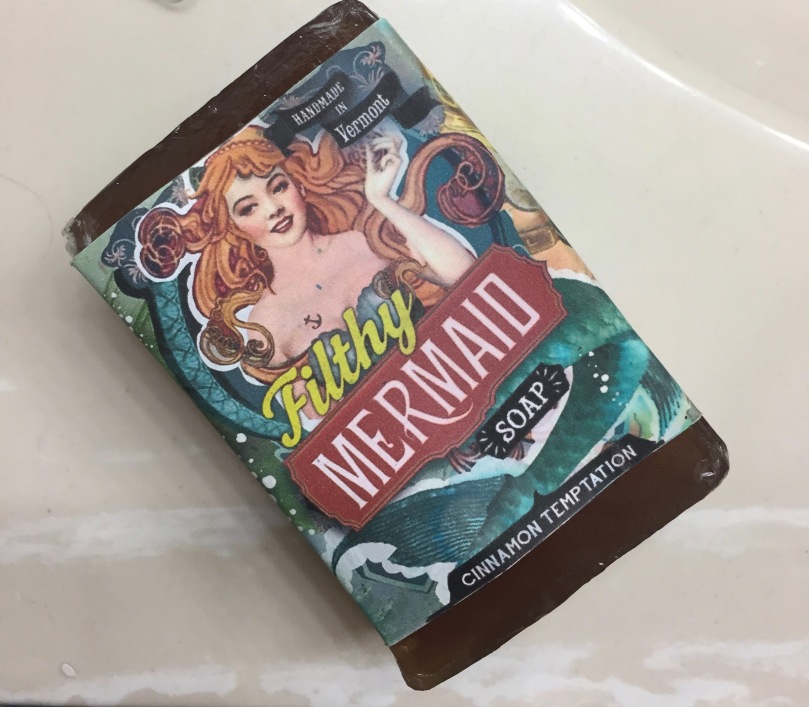 This soap hails from a small soap making company called Filthy Farmgirl. They have a wide range of delicious smelling soaps (I have a couple others from them as well), and it seems like they have something to suit everyone’s scent preferences. Mermaid is a rather spicy, sexy scent. It’s chock full of cinnamon, so it’s a special kind of delicious; it really does taste good enough to eat.

I think small companies can be so nice to support, because they tend to sell directly to people at farmer’s markets and at conventions, and even if you can’t get to a place where you meet them in person, usually they’ll have online shops that really show off their charm.

Filthy Mermaid is a soap that I highly recommend because not only does the soap smell good, but it lathers nicely and makes me skin nice and soft. I often fear using soap in areas other than those that need it, because I don’t want my skin to get dry and gross, or greasy. I did not suffer from either of these possible problems with Filthy Mermaid, and I’m guessing (and hoping) that I won’t have issue with the other soaps I bought from Filthy Farmgirl.

If you’re intrigued by Filthy Farmgirl, you should check out their etsy here. They’ve got loads of awesome products, fun labels, and are 100% natural. What’s not to love?

All logos and photos depicted are copyright of their respective owners.