Alright friends and Fangirls, we’re going to get personal very quickly today, as we’re diving right into a conversation about periods (maybe “dive” wasn’t the best word choice. Oh well). Periods can suck, because often you’re tired, you’re in pain, and sometimes you end up ruining your favorite undies. It’s the worst; nobody wants to think “oh it’s over” and then find the last remains of your happiness spotting your favorite undies. Nope. So when I was told about Harebrained’s Period Panties (by my friend Colleen, who is hilarious and perfect), I was intrigued. Then I saw the designs, and was delighted.

Harebrained Designs have come up with some hilarious (and slightly worrisome) designs for period panties. They all feature blood, which is a little gross, but it’s in the form of euphemisms and movie references. I got myself a pair of Redrum panties, inspired by The Shining (the butt features the creepy twins and I love it). I honestly didn’t do much research before buying them; they came highly recommended, and they were funny, so I spent the $12 and went on my way. 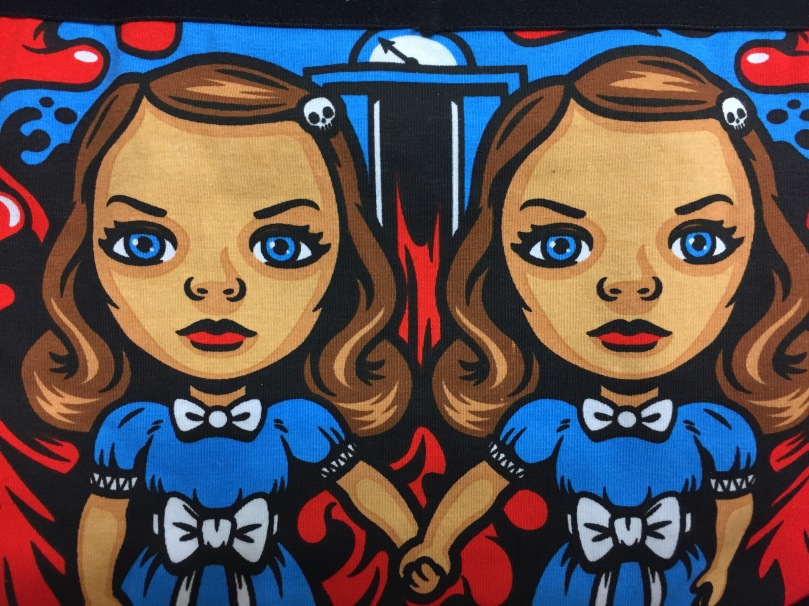 They came the week before period week (heck yeah, great timing), and I still didn’t check them out. I took a li’l photo of my mail that day, and they sat around on the table because I’m lazy. Since I did not properly examine them, I was surprised when I went to put them on; the crotch area (where a pad would go) and through the front are extra lined with black fabric. I wouldn’t wear them without other protection, but that blew me away; if you spot or if you don’t notice that it’s time to change your gear in time, your undies won’t be ruined, and no one will know! I got legitimately so excited, and I was already pumped to put on hilarious underwear.

Once I got them on, I noticed that though they were a bit snug, they were super comfortable, and I loved wearing them. They feel secure! I am incredibly grateful for the recommendation, and just had to pass it on to all you Fangirls! Like I said before; these aren’t something I would wear without something else, unless it’s what I think is the day after my period. They offer some reassurance with the black, double lined undercarriage, and that really excited me. I think they’re phenomenal, and everyone should check them out; I’m sure they’ll have a movie referenced that you’ll enjoy!

You can see these, and other hilarious undies here!