This episode is going to be extremely difficult to summarize. This episode had a ton of stuff in it and I need to figure out how to unpack it all. I’m going to try to here but I gotta say, this episode is best watched and heard rather than summarized. The writing is more superb than ever.

I need to start with this; nothing in tonight’s episode was in the novel. Absolutely nothing. However, it would fit so damn perfectly into the novel.

Also, this episode touched on some very hot button topics right now in America and it did so beautifully. I think to explain this I need to break it into two parts.

Part one, Shadow and Wednesday. They’re on the run after the encounter with the new gods and Shadow tells Wednesday about Laura. Wednesday is not too thrilled by this and actively ensures Laura doesn’t get to Shadow again. He takes them to Vulcan Virginia, a truly scary version of America. It’s all industry, gun manufacturing industry to be precise. At the helm is Vulcan, god of fire and forge. The entire town worships him. They all know who he is and they all actively worship him. Hell, they even sacrifice to him once in a while in a “factory accident.” Wednesday asks Vulcan to join his army of old gods, and Vulcan agrees. He even makes Wednesday a sword. Unfortunately, Vulcan has also sold out and become a franchise through the new gods. He says every gun fired is a new prayer for him, one that makes him stronger. His betrayal to Wednesday ends in his death and Wednesday and Shadow go off to find more friends. 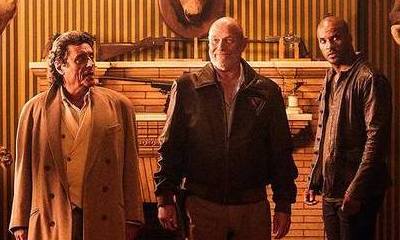 Part two, the greatest trio to exist. Laura returns to the motel as Shadow and Wednesday drive away, as does Mad Sweeney. Sweeney is determined to get his coin back, so he offers to take her to a guy who can resurrect her without a magic coin. Win win. They try to steal a cab, which turns out to be Salim’s cab. If you don’t remember, Salim is the man in NYC who spent a night with a Jinn and was granted a new life. And now Salim wants to find that Jinn again. Salim offers to help them if Mad Sweeney (who says out loud that he’s a leprechaun) can bring him to the Jinn. The three begin their road trip, and really between their scenes and the several speeches Wednesday gives this episode is the most powerful most beautiful one yet. Salim quickly figures out that Laura is dead and that he’s part of their story now. Laura returns home to try and see her family again, but none of them see her watching through the windows. It’s a beautiful scene that also shows Shadow’s connection to her as he can see her in his mind when he thinks of her. She returns to Salim’s cab and the trio begin the journey to Kentucky, where Mad Sweeney’s resurrection guy is. Salim needs to stop to pray, and through his prayers and one line from Laura (“Life is good, Salim not Salim [which she calls him because he was given a new life and name by the Jinn]”) we get such insight into all three of them. Seriously, this is the team of my dreams.

This summary does not do what I just watched justice. The writing, the power of this episode, is what you truly need in order to understand this episode. It was perfection. brand new American Gods perfection.

Next week is all about Mad Sweeney and his journey through America and in Wednesday’s world. I am ready. Except not because I have a feeling I know how it’s going to end. But I’m very ready.