While I would love to say that I practice self love every day, it’s something I struggle with. But the absolutely incredible Amanda Swiger had an event la couple weeks back, titled Self Love Saturday, and I had the pleasure of attending!

Quick note: this post contains images of folks that are 18+ in lingerie and undies. If you are not comfortable with that, please do not click the more tab!

Alright, now that that’s out of the way, lets talk about the amazing party that I got to take part in! About a month ago, Amanda Swiger announced that she’d be hosting a Self Love event, which she had also hosted last year. I jumped at the chance to see her again; she’s a professional photographer who I had met one other time for a boudoir session (you can read all about my session over on Sartorial Geek!), so I knew I wanted to work with her again. This event was going to be filled with awesome folks supporting each other and having mini sessions with Amanda.

At the beginning of the event, Amanda told us that she had been pouring from an empty cup for too long, and that she was doing things to better herself. For her, that meant she was significantly changing the way she runs her business; she is going to start charging more, and taking far fewer boudoir sessions. Luckily for us, she wanted to go out with a bang! There was one pretty serious rule about this day, though. There was no negative body talk allowed; no discussions about diets or weight loss, or anything like that. We were only allowed to appreciate ourselves! 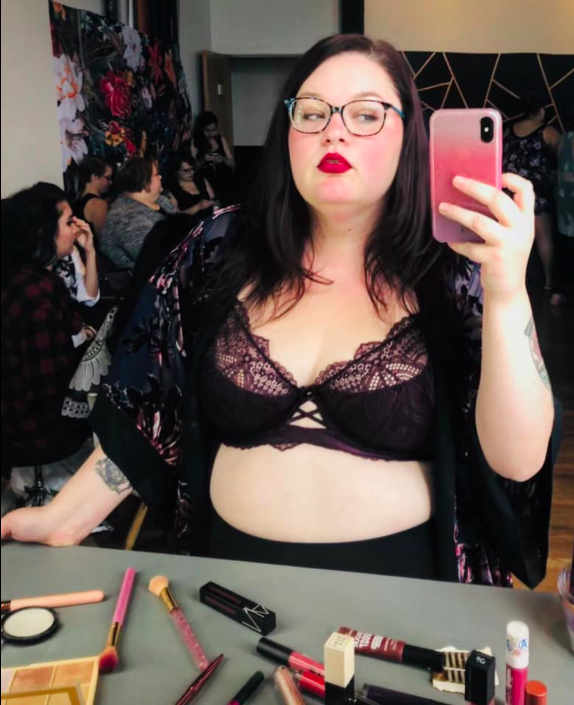 We were also all given a sticker sheet and a flashlight. Since it’s impossible for Amanda to be everywhere with us, this was a way for us to remember our time this weekend. But the stickers were the important part: we were to find people we wanted to compliment, do so, and give them a sticker on their flashlight when we had complimented them. It was a great ice breaker that didn’t feel as forced as some I’ve participated in, and honestly, now I’ve cried over a flashlight. So that’s fun.

After that, Amanda started shooting. She had a couple helpers (who were making sure she stayed hydrated and was at least having snacks, along with maintaining the food and drink table). There were tons of popcorn and pretzels and pizza beyond belief! But most of all, there was a really positive atmosphere.

I went with my friend Sam (we left Baltimore at 8:45am on a Saturday to get to Philly for 11), and she said she had a really positive time too! We both met a ton of lovely folks who I now follow on instagram and are friends with on Facebook. I really can not wait to see the photos I took with Amanda, because they were an experience in themselves.

You see, dear Fangirls, as each person was doing their shoots, everyone else was cheering them on. There was more hooting and hollering than I’ve heard at a burlesque show (which is saying something). My session even got a bit interactive, as someone said that my photos would look even better with a handprint. She gave me a perfect handprint on my cheek that stayed at least 24 hours (10/10 butt slapping, would recommend to everyone).

Overall, this was such a phenomenal experience. I got to go to a city I’ve barely been to with a friend, hang out with a bunch of powerful women in lingerie all day, and eat pizza and drink bourbon! Honestly, I’d love to spend every Saturday like this.

I highly recommend you check out Amanda’s work. She’s an amazing photographer, and while her books are currently closed, you should follow her to see what comes next from her, because I know it’s going to be incredible!

So I’m not going to lie to y’all, I wrote this immediately after the event. I didn’t post it right away because I wanted to make sure Amanda was cool with me writing about it, and to see if some of the babes were cool with me sharing the images (wow, were they!). But now that I have had a bit of time to think about it, I can tell you that this was one of the best things I did this year. I can say it with full confidence because not only did I have an awesome time, but I met so many strong and inspiring folks. After this experience I felt like myself, which is something I have been struggling with for quite some time.

One of the things I have felt that I’ve struggled with since moving was making my own friends. But at Self Love Saturday, I felt like I made some incredible friends. I’m hoping to go back up to Philly to hang with some of these lovely ladies, and keep these friendships up. I can not thank Amanda enough for baring herself with all of us there. And to all of the amazing folks who were at the event, you made it what it was too. To the people who worked it, both in their lingerie and behind the snack table, thank you. To those who came out of their comfort zones to hang out in their undies with a bunch of strangers, thank you. And to every single person in the room, who stopped what they were doing to sing “why men great till they gotta be great?” together, thank you. This was truly incredible, and I am so grateful for every second of it.

All images depicted are copyright of their respective owners.